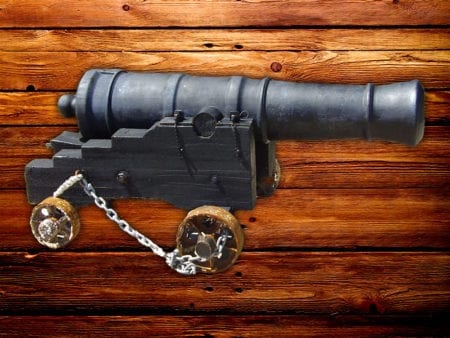 The Gribeauval  Cannon was introduced through royal order on 15 October 1765. Hern was commissioned to reproduce six barrels for the Virgin Islands. *Carriage not included*

Hern Iron Works was commissioned to recreate several barrels as well as reproduction Iron Garrison carriages for a restoration project in the British Virgin Islands. This is a handsome gun, and would sit well on a naval gun truck or on a split trail field carriage.

The Gribeauval  Cannon was introduced through royal order on 15 October 1765. Although much of the work is not directly attributable to Gribeauval (see Honoré Blanc), the systems of organization and uniformity in ordnance have been called le système Gribeauval.  The Gribeauval Cannon  (French: système Gribeauval) was an artillery system introduced by Lieutenant General Jean Baptiste Vaquette de Gribeauval during the 18th century. This system revolutionized French cannon, with a new production system that allowed lighter, more uniform guns without sacrificing range. The Gribeauval system superseded the de Vallière system. These guns contributed to French military victories during the Napoleonic Wars; the Gribeauval system was “arguably the best artillery system in Europe at that time”.[  Gribeauval’s  primary improvement came in the production of large artillery pieces. Prior to his improvements, guns were cast in a single piece by pouring molten iron or bronze around a clay cylinder. After the metal cooled, the clay was removed, leaving the gun’s bore. However, this made guns with imperfect cores, which prevented the use of tight-fitting cannon balls; because rounds did not fit tightly, much of the explosive power of the gunpowder was lost. Gribeauval created a new system of production, initially developed by Jean Maritz, casting guns as a single, solid block, and then drilling the bore on a large machine: the entire barrel of the gun rotated against a massive drill bit, and the cutting head was advanced by means of weights and cogs. The resulting guns had tighter manufacturing tolerance between the bore and ball and allowed thinner barrels to be made without sacrificing range. Because the projectile fit the gun much more tightly, the barrel could be shorter without reducing accuracy; the shorter, thinner, barrel reduced weight. Gribeauval also designed improved carriages which allowed highly mobile field pieces.
X