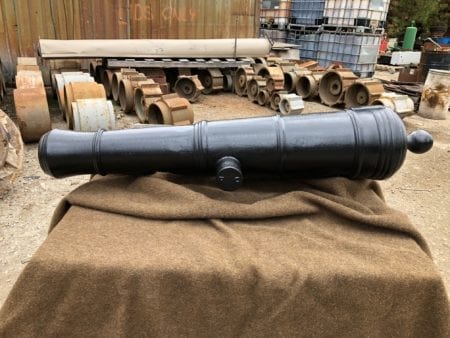 Newest addition to the cannon offerings from Hern!  A historical reproduction of the iron 4 pounders used by the Texas revolutionaries at the battles of Goliad and Alamo.  The pattern was commissioned by R. Chisum, who collected dimensions from the original tubes still on display at both the Alamo and a memorial near the town square in Goliad Texas.

While researching and doing a full restoration of cannons from the Alamo, Texas A&M was able to identify makers marks on a larger 6 pounder of very similar design indicating with a high probability that it and conversely these 4 pounders were manufactured at Bersham Foundry in Wrexham, Wales, probably between 1770 and 1795.  Age, condition, and lack of records do not allow for a definitive statement, but there is much to point in this direction.

Like before, Taxes and Cannons set up the revolution of Texas from Mexico.  Americans settling in the west were happy to settle on this open land in northern Mexico, and were induced by little to no taxes for the first many years.  As the population grew Mexico decided they should assert more control over their territory, and the new Texan American and Tejano settlers didn’t take kindly to new taxes being applied. A-la 1774 British Colonial America only 60 years prior.

Soon enough, Mexican Army and Tax collectors came demanding taxes and the cannon from Gonzales Texas in the Fall of 1835.  This cannon became known as the ‘Come and Take It’ cannon.  By the time May of 1836 finished out and Santa Anna was defeated, accounts list over 80 land based cannon and 30 plus aboard ships.

The 4 pounder cannons were used by the forces under Colonel James Fannin at Coletto Creek and Goliad; and under Jim Bowie and William Travis at the Alamo Mission.  In both instances upon defeat, probably by Mexican forces cleaning up non-standard (to them) calibers of cannon – the cascabels and knobs (trunnions) were broken off and the cannon spiked and discarded.  This was done to save haveing to take the guns with them, and keeping them from being used in the future by the Texans at some later time.  This is the state they were in when found later at the Alamo site (1852) and at Goliad (~1880).

Today’s production is Cast Iron, cast around a 1/2″ wall DOM tubing, w/ concave breach plug.  Weighing in at 630#, these big guns ship via truck, and freight charges are driven by current prices of fuel & distance to destination.  A commercial address with a forklift will save you money.  Upon order & payment for your barrel, you will be contacted by our office to confirm shipping details and provided with a specific quote.  You can pay for shipping over the phone at that time, or mail in your payment.  $250- $400 is a common range for these shipping charges.

Large guns are not kept in inventory – they are cast to order.  Typical production times are 6-8 weeks. 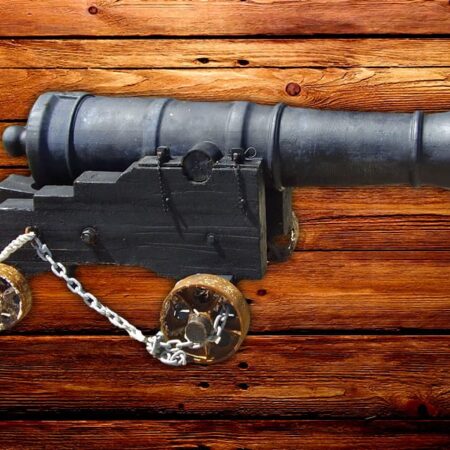 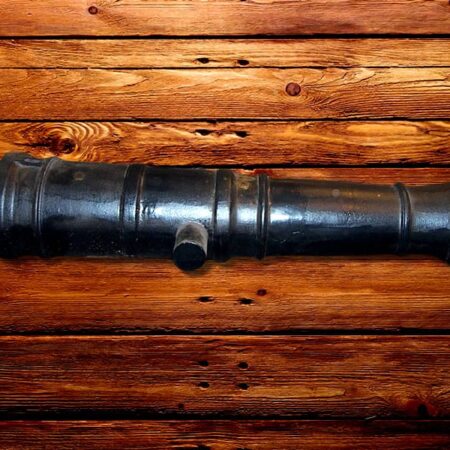 The Gribeauval  Cannon was introduced through royal order on 15 October 1765.  Hern was commissioned to reproduce six barrels for the Virgin Islands.  *Carriage not included*