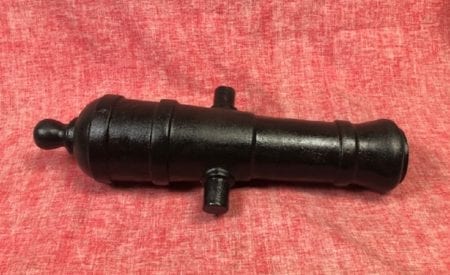 Frontier Swivel guns  were used principally aboard sailing ships, serving as short-range anti-personnel ordnance. They were not ship-sinking weapons, due to their small caliber and short range, but could do considerable damage to anyone caught in their line of fire. *Carriage not included*

The Frontier Swivel is part of our smaller fun sized cannon in the popular golf ball bore.

I generally keep one or more on hand as these are quite popular with the 1-3/4″ golf ball bore; sometimes we do run out of stock but will let you know if there will be a delay in fulfilling your order! { Feb.’19: TWO cannon on hand and ready to ship out!}

This barrel was originally brought to us as a Swivel gun; but lends itself to a naval carriage or split trail field carriage if so desired as well! At 90 pounds for the barrel, and a similar number for the carriage you put together – these are fun to place in the living room, and to take to the gun shows and shooting range!!

Similar in lines to the English Swivel, this is a bit shorter and fatter at the breach. Not unlike some of us humans.

FRONTIER SWIVEL GUN  Swivel guns  are among the smallest types of cannon, typically measuring less than 1 m (3 ft) in length and with a bore diameter of up to 3.5 cm (1¼ in). They can fire a variety of ammunition but were generally used to fire grapeshot and similar types of small-diameter shot, though they could also fire small caliber round shot.

Most swivel guns were muzzleloaders. They were aimed through the use of a wooden handle, somewhat similar in shape to a baseball bat, attached to the breech of the weapon. Some Swivel Guns were designed as breech-loading swivel guns as early as the 16th century, making them among the first such examples of this type of weapon. Breech-loading swivel guns had a breech shaped like a beer mug, which the gunner would take by the handle and insert into the body of the swivel gun with the breech’s opening facing forwards.

The gunpowder and projectiles were loaded into the breech before it was inserted into the gun. If a number of breeches were prepared beforehand, the gunner could maintain a high rate of fire for a brief period simply by swapping out the used breech and replacing it with a freshly loaded one. Frontier Swivel guns were used principally aboard sailing ships, serving as short-range anti-personnel ordnance. They were not ship-sinking weapons, due to their small caliber and short range, but could do considerable damage to anyone caught in their line of fire.

Due to their relatively small size, swivel guns were highly portable and could be moved around the deck of a ship quite easily (and certainly much more easily than other types of cannon). They could be mounted on the deck railings of a ship, which provided the gunner with a reasonably steady platform from which to fire. Their portability enabled them to be installed wherever they were most needed; whereas larger cannon were useless if they were on the wrong side of the ship, swivel guns could be carried across the deck to face the enemy.

The small size of swivel guns enabled them to be used by a wide variety of vessels, including those too small to accommodate larger cannons, and also permitted their use on land; they were commonly issued to forts in North America in the 18th century, and Lewis and Clark took one with them on their famous expedition into the American interior in 1804.[2] Swivel guns also had peaceful uses. They were used for signalling purposes and for firing salutes, and also found uses in whaling, where bow-mounted swivel guns were used to fire harpoons, and fowling, where swivel guns mounted on punts were used to shoot flocks of waterfowl (see also punt gun).

Frontier swivel guns were extensively used by the kingdoms and empires of Asia, particularly China and Korea. The first Chinese swivel guns were cast as early as 1520 after being introduced from Europe, and Korea followed suit by the 1560s. During the Japanese invasions of Korea (1592–1598), Korean naval forces used swivel guns and larger cannon to great effect in interdicting the invading Japanese forces. The English swivel cannon  should not be confused with pivot guns, which were far larger weapons mounted on a horizontal pivot, or screw guns, which are a mountain gun with a segmented barrel. *Carriage not included* The Ordnance Board of 1841  drew up the design for this gun, which is one of the most common of all the artillery pieces of the Civil War. Originally a smooth bore, many were rifled to fire the James projectile, and are sometimes erroneously referred to as James Rifles. The smooth bore had certain advantages over the rifle; in the wooded terrain of the typical Civil War battlefield, range was less important than rate of fire, weight of shot, and the ability to fire canister. *Carriage not included*