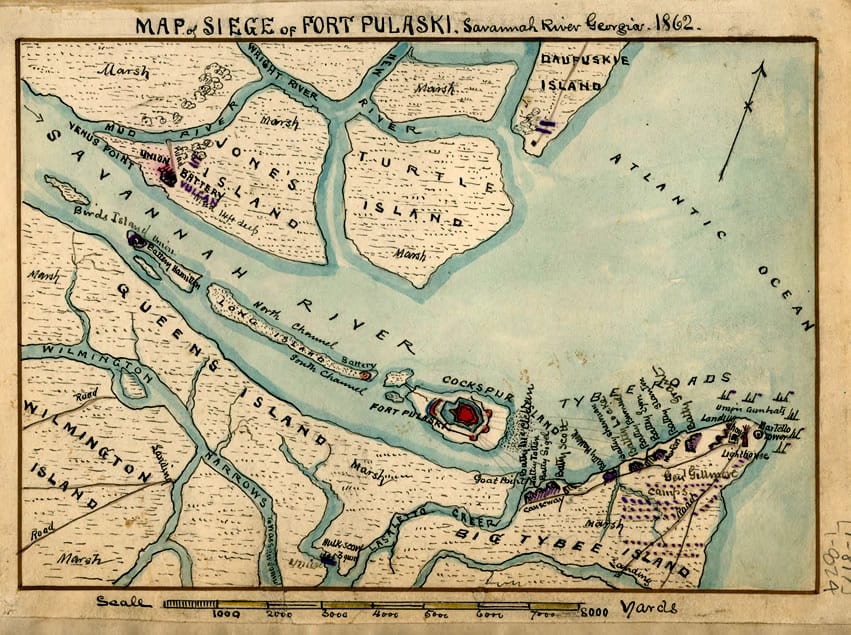 By bayley@usacomputer.net
Comments Off on Bombardment of Fort Pulaski

U.S. Army command decided to block Savannah, Georgia’s access to the Atlantic Ocean by capturing Fort Pulaski downstream from Savannah on the Savannah River. Federal forces made an unopposed landing on Tybee Island December 24, 1861. Guns and supplies for the reduction of Fort Pulaski were landed on Tybee Island on February 21. The siege batteries were ready by April 9. Fort Pulaski was then armed with 48 guns, 20 of which bore on the batteries on Tybee Island- 14 smoothbore guns and columbiads, one 24-pounder Blakely rifle, and four mortars. The garrison was 385 men.

At sunrise April 10, 1862, the Federal forces formally demanded the surrender of Fort Pulaski, the demand was refused and at 8:15 AM the first shot was fired. Confederate return fire was vigorous, but not very accurate and Fort Pulaski was breached that afternoon. The James rifles and 4.2-inch Parrott rifles did most of the damage to the fort. The Federal mortar fire was very inaccurate. After nightfall, a desultory fire was kept up, to prevent the Confederates from repairing the breach. After sunrise on April 11, firing resumed, and the breach was rapidly enlarged and eleven Confederate guns dismounted or otherwise rendered unserviceable. At 2:00 PM, Fort Pulaski surrendered. Remarkably, only one man on each side was killed in the lengthy artillery engagement.

Photograph of the breach at Fort Pulaski

The fall of Fort Pulaski demonstrated that masonry fortifications were obsolete in the era of rifled artillery. General Gilmore, senior Federal engineer officer at Fort Pulaski, quoted a military treatise of the period as saying an “exposed wall may be breached with certainty at distances from 500 to 700 yards … and it will take from four to seven days firing ….” (Gilmore 1882,). That had been with smoothbore guns, with rifled guns firing at distances of over 1,600 yards, the breach had been made in a day and a half.