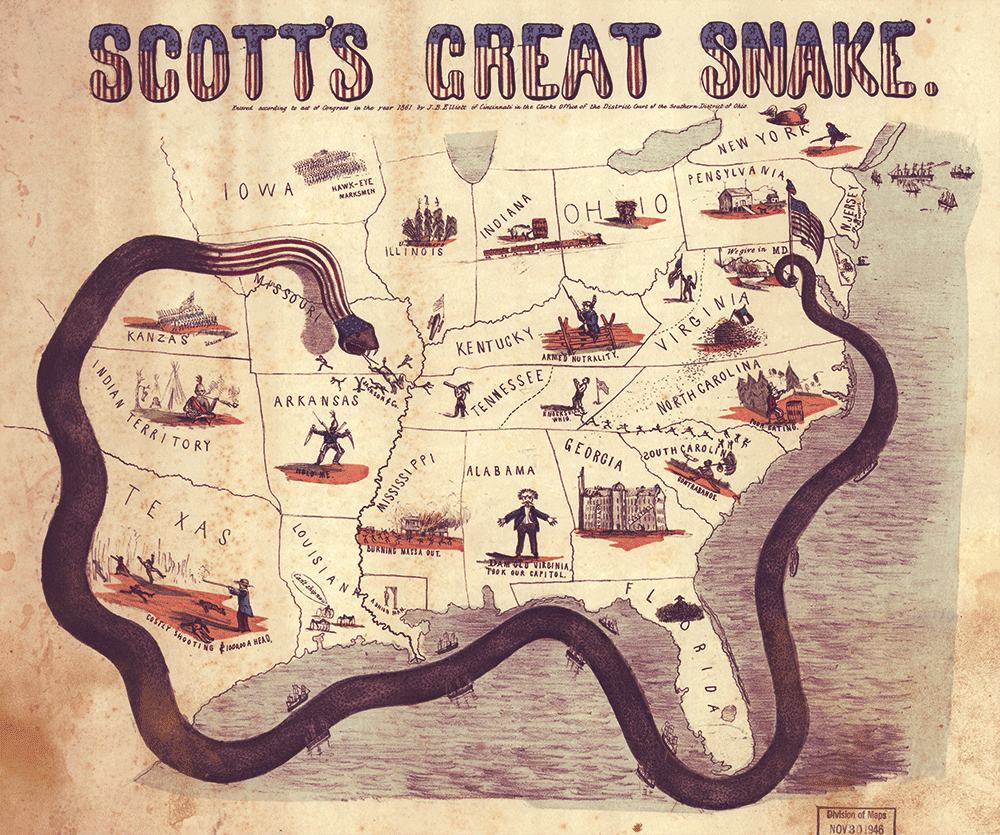 By bayley@usacomputer.net
Comments Off on Anaconda Plan

The Anaconda Plan is the name widely applied to an outline strategy for subduing the seceding states in the American Civil War. Proposed by General-in-Chief Winfield Scott, the plan emphasized the blockade of the Southern ports, and called for an advance down the Mississippi River to cut the South in two. Because the blockade would be rather passive, it was widely derided by the vociferous faction who wanted a more vigorous prosecution of the war, and who likened it to the coils of an anaconda suffocating its victim. The snake image caught on, giving the proposal its popular name.

The plan and its critics

In the early days of the Civil War, General-in-Chief Winfield Scott‘s proposed strategy for the war against the South had two prominent features: first, all ports in the seceding states were to be rigorously blockaded; second, a strong column of perhaps 80,000 men should use the Mississippi River as a highway to thrust completely through the Confederacy. A spearhead consisting of a relatively small amphibious force, army troops transported by boats and supported by gunboats, should advance rapidly, capturing the Confederate positions down the river in sequence. They would be followed by a more traditional army, marching behind them to secure the victories. The culminating battle would be for the forts below New Orleans; when they fell, the river would be in Federal hands from its source to its mouth, and the rebellion would be cut in two.

Scott’s plan had elements similar to a plan created before the Civil War. That antebellum plan was intended to crush a limited domestic insurrection by closing ports and using the Army to pressure civilians to demand surrender. It was not intended to deal with a new political organization with a regular army.

The complete strategy could not be implemented immediately, as no warships of the type imagined for the Mississippi campaign existed. For example, the U.S. Navy was too small to enforce the blockade in the first months of the war. It would take time to gather and train the forces needed to carry out the central thrust, time that the critics of the plan were unwilling to concede. Hence, Scott’s plan was subjected to a great deal of ridicule. His opponents called for an immediate overland campaign, directed primarily at the Confederate capital of Richmond, Virginia. Their stated belief was that if a few strongholds were taken, the Confederacy would collapse.

The conflict was not the brief affair that Scott’s critics imagined. In the four years of war, the Federal Navy enforced a blockade that certainly weakened the South, although its effect on the war effort is still debated. Furthermore, the Confederacy was split in two by a campaign based on the Mississippi River, and a consensus has now been established that this Southern defeat was at least as important in the final collapse of the Rebellion as the land battles in the East that had so long attracted both public and historians’ attention. The form of the Northern victory thus turned out to look very much like what Scott had proposed in the early days. Consequently, the Anaconda has been somewhat rehabilitated, and general histories of the Civil War often credit it with guiding President Abraham Lincoln‘s strategy throughout.